The Christchurch Catholic Cathedral is a proposed replacement to the original Cathedral of the Blessed Sacrament, after it was damaged in the 2010 and 2011 Canterbury earthquakes. It will be located next to Victoria Square in the city centre of Christchurch, New Zealand. The cathedral is expected to be completed by 2025. The plans were announced by Bishop Paul Martin on 7 December 2019.

The Cathedral is only part of a large $500m collaboration called ‘North of the Square’, partnered with the Catholic Diocese of Christchurch, Ōtākaro Limited, and the Carter Group. This development will include new offices, a five-star hotel and a multi-storey carpark. “North of the Square” has been billed as the largest private multi-site construction undertaken in the central city post-earthquakes, covering two large blocks of high-profile land, which have sat empty since 2011.

The Catholic precinct will cost $100m, with $40m being designated to the construction of the cathedral. The remaining funds will be spent on chancery offices, an open courtyard, a garden and parking.

There are two architect companies that are to design the new cathedral. One is a local architect firm, Warren and Mahoney Architects who are based in Christchurch, and Franck & Lohsen Architects from the United States. Franck & Lohsen are known for their traditional designs and have built churches all over the world. Bishop Martin is stated saying why this firm was chosen:

Rawlinsons have worked with the Catholic Diocese on many projects and are very proud to have been selected as lead Quantity Surveyor and Cost Consultants for this iconic project. 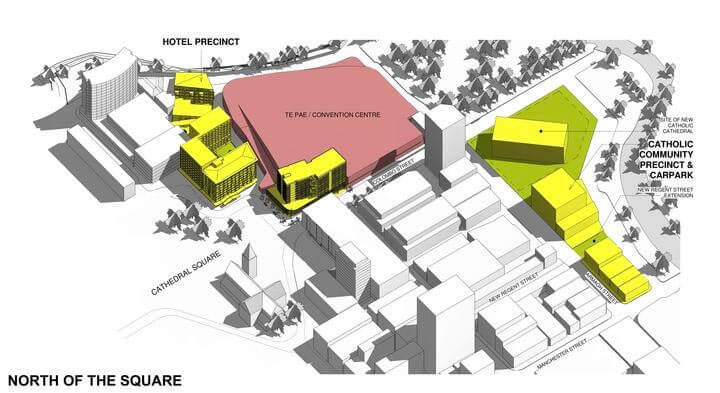